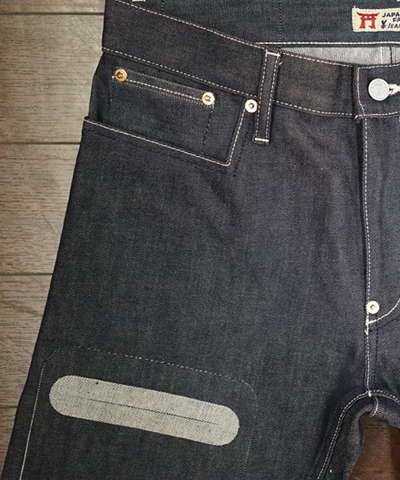 Yen Jeans is a Tokyo-based premium denim brand started in 1996.
Using vintage denim weaved with a power loom from Okayama, Yen Jeans offers a design that is not bound by the conventional concepts of denim.
The production of Yen Jeans lavishly incorporates traditional Japanese culture and techniques, such as Kyo-Yuzen and Amami Oshima’s Dorozome dyeing technique, as well as traditional textiles. In addition, Yen Jeans’ models include Twist Jeans offering three-dimensional, ergonomic design, Super Hipster, in which the waist part has a different cloth to make the jeans look hipster as much as possible, and Future Jeans designed with less patterns by eliminating side seams to raise production efficiency. Yen Jeans is known for its denim design invented and created from the brand’s unique perspective.
Yen Jeans’ unconventional ideas quickly won popularity overseas. In 1998, London’s two leading specialty boutiques, Jones and Browns, began sales of Yen Jeans, which were followed by L’eclaireur in Paris and more than 90 prestigious shops around the world.
Although the brand ended production once in 2007, Yen Jeans made a comeback in celebration of its 20th anniversary in 2017.
With the brand’s original concept, Yen Jeans offers Tokyo denim that leads to the future.

Makes its re-debut in Europe at Selvedge Run in Berlin.